The deadly risk that welders face 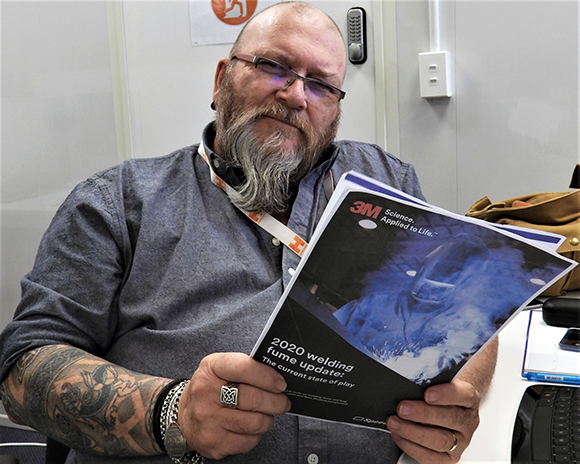 Site Safe's Mark Walklin reading the AWS White Paper which analysed more than 30 studies on the effects of welding fumes.

Welders in New Zealand  face a severe risk from respiratory tract cancers. In fact, a recent international study says welders have a 43 per cent increased risk of lung cancer compared to people not exposed to welding fumes.

Site Safe’s Mark Walklin says even if welders avoid cancer, it is possible many will suffer  initially unseen forms of harm such as scarring to the trachea and lungs if they don’t use some form of respiratory protective equipment (RPE). Others will suffer from the effects of exposure to the harmful substances used in, or generated by, welding.

Mark should know the downside of not using RPE. He says his doctor has told him he has the lung capacity of an 8-year-old child which is due to the fumes from a career in welding that began long before there was a Health & Safety Act.

He started out as a fitter/welder when he was 16, working on agricultural machinery, first in Marton and then moving into general engineering and construction around NZ and Australia.

The effects on his health got so bad he had to give it up, switching to horticulture and then factory work. (After working as a specialist in welding coated metals, he vividly remembers sometimes waking up in the middle of the night wheezing and coughing up blood.)

These days he’s a product developer at Site Safe. He believes New Zealand hasn’t done well when it comes to looking after welders.

It’s not just New Zealand though, Mark says. When he was welding coated steel in Australia, his only respiratory protection was the paper mask. It doesn’t stop much.

“I used to say to apprentices when they’re training, if you’re welding a chair leg, some of that steel gets vaporised in the arc, becomes part of the fume rising into your helmet, It’s still steel but now its in a form you can inhale. Whatever you’re working on, some of it always gets inside the guy doing the welding.”

The recent White Paper by AWS (Australian Welding Supplies) contained an analysis of 35 studies on exposure to welding fumes and the risk of lung cancer from 1954 to 2017.

The conclusions of the study were:

Mark says it’s not just lungs that can be affected - the constituent parts of different metals, shielding gases and flux coatings affect different organs. He says stainless steel welders have a higher incidence of nasal and laryngeal cancers and MIG welding generates ozone which is a respiratory tract irritant. Carbon dioxide is a common shielding gas that converts to carbon monoxide in the welding process and he says  prolonged exposure can cause damage to blood vessels and heart muscle. Manganese damages the brain; cadmium damages the kidneys and beryllium hurts the heart and liver.

In 2017 the International Agency for Research on Cancer (IARC) reclassified welding fumes  from “possibly carcinogenic” to “carcinogenic to humans”.

As to how to deal with it, Mark says extraction at source above where the welding is taking place is a good starting point. But it’s not just a matter of pushing it outside.

“You can’t just vent out the window. The requirement is to capture all the harmful particulates, not just blow them over the neighbour” he says.

In Britain last year the government’s Health and Safety Executive released a health bulletin saying there was no safe of exposure to welding fumes and declared general ventilation was not acceptable.

Two of the best solutions offered in the White Paper are the use of helmets fitted with a powered air purifying respirator (PAPR) or a supplied air respirator.

Powered air respirators bring in air via a mini portable pump to the full-face welding mask to create a positive pressure to keep fumes out.

Supplied air systems use air from a line pumped to the welder’s helmet to also keep the pressure up and the fumes out.

Mark says while the PAPR type is more versatile, the downside with these is the cost, which can be $2000 or more. Often employers aren’t keen to pay for these, and welders often can’t afford them.

So things carry on, and welders suffer, he says.

“There is incontrovertible evidence that welding without proper respiratory protection is harmful, and the evidence has been around for decades.

“When I first  met my wife I naturally also met her family.  One of her uncles was a pleasant guy in his sixties.  He had to drag a little oxygen cylinder behind him with tubes going up his nose.  I used to watch him trying to walk from the driveway to the house.  He would take a couple of steps and stand gasping for a while then step some more.