Fixing the damage, looking after the workers 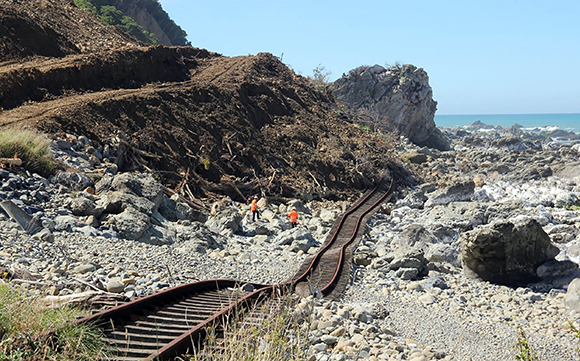 Looking after the wellbeing of the staff working on the Kaikōura infrastructure rebuild meant being flexible and caring about their welfare, and that of the local community.

The huge amount of work done looking after workers and the local people of the area earned the North Canterbury Transport Infrastructure Recovery Alliance (NCTIR) a special judges’ mention from the recent Site Safe Awards.

The 7.8 quake in November 2016 dumped nearly a million cubic metres of rock on State Highway 1 and the Main North Line railway. As part of the rebuild, the NCTIR Alliance was created as a partnership between the NZ Transport Agency and KiwiRail, along with Downer, Fulton Hogan, HEB Construction and Higgins. Since then more than 8000 workers from 350 companies have worked on 180 sites.

It’s been hard work  in a challenging environment, and Stephen Bell, the Health and Safety Manager for the project, says a key challenge was helping the hundreds of workers adapt to a life away from homes and families.

The judges said NCTIR’s entry was a bit outside the usual scope of the awards but was so remarkable that they gave NCTIR the special nod. (The winner of the award was a three-way tie between Paul Lynch of FloorRight Installations, Switched On Group and Dave Burt of Team Cabling.)

In their commendation the judges said what made NCTIR special was that it made wellbeing a company priority.

“It’s a topic for positive discussion from the top down, and the plan doesn’t stand still,” the judges said.

“We believe that every business has something to learn from the lead that the NCTIR has taken.”

Bell says a key lesson learned was that NCTIR  had to check up on how people were doing all the time and adjusting what support was needed. 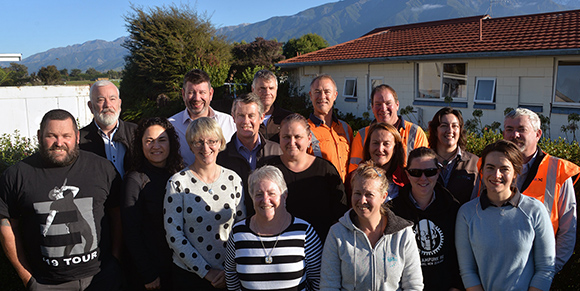 Some of the mental health first aiders who worked with the workers.

“From mid-2017, we led a hearts-and-minds campaign focused on the lifesaving rules to promote good workforce behaviour and ensure workforce wellbeing.”

He says the whole NCTIR team was focused on reopening the intra-island transport networks and that gave them a high tolerance for work-related stress -  but it did lead to mental fatigue and burnout for some.

“The initial programme promoted self-care and use of the ‘5 ways to Wellbeing’.

“We also employed two local dedicated Wellbeing Officers to check in with workers.”

But the hard winter in 2018 threatened to knock the stuffing out of people.

“We quickly found we had a tired, project-worn workforce. The wellbeing programme was revitalised, and mental health advocate Mike King was brought in to talk to all the workers.

“It was during this time that we first trained 12 staff as mental health first aiders using the CoLiberate programme.”

NCTIR also made it easier for workers to spend more time with their families by adjusting the work hours.

“Most construction workers were there to earn better money than they could in their hometown, so working hard while they were there was important to them,” Bell says.

They also said if they were having a day off, they’d prefer it to be at home.

This led to a new Fatigue Management Guideline, and option of a new 10.5-day continuous work roster: Construction teams worked12 hours per day most days, but only 8 hours on Saturdays to allow for additional recreational time on the weekends that they stayed in Kaikōura. The new roster meant that on the alternate weekend they got 3.5 days at home, with travel as part of their last roster hours for the fortnight.

Knowing they had a good break, with some downtime while the kids were at school, and while services such as banks were open, hugely boosted morale, Bell says.

Having people embedded in the workforce who are there to monitor wellbeing gives managers eyes and ears on the ground.

“We created a dedicated wellbeing team and established two Wellbeing Officers. They joined breakfast at the accommodation Village at least weekly, were regularly out on site, and were always available by phone, connecting with and listening to people.”

They also took practical, immediate action where needed. When a worker’s brother suddenly passed away, a Wellbeing Officer drove him to Christchurch airport so he could get home quickly.

The result was the officers won the confidence of the workers, and people knew that practical, on-the-ground support was available if they had a problem,

“As the project has changed from recovery to improvements and the number of workers has decreased, we’ve adjusted our model,” Bell says.

“We have one Wellbeing Officer, with 24 people across the project trained in mental health first aid, using the CoLiberate program. This includes construction managers, health and safety staff, human resources staff, and a range of people who regularly visit offices and sites.

“Engagement with this team continues to be positive, with each person having a conversation an estimated 20-30 times per month on average, so we know they are reaching people when help is needed.”

They then rolled out the secret weapon in the shape of Mike King again in winter 2019 with almost all the workforce turning out to hear him. NCTIR also gave out merino tops and beanies to keep workers warm.

They have also given out fridge magnets for workers’ families so they had an emergency contact number if there was a family issue and the worker was not contactable.

All the efforts  paid off with a workforce that feels valued, Bell says.

“And while we know our wellbeing programme is working, we also need to continue adapting it to meet the team’s needs.”

Smoko at a cafe in Kaikoura.

The Five Ways to Wellbeing

The Mental Health Foundation says building five actions into daily living is important for the wellbeing of individuals, families, communities and organisations.