Valuing the person, and the team 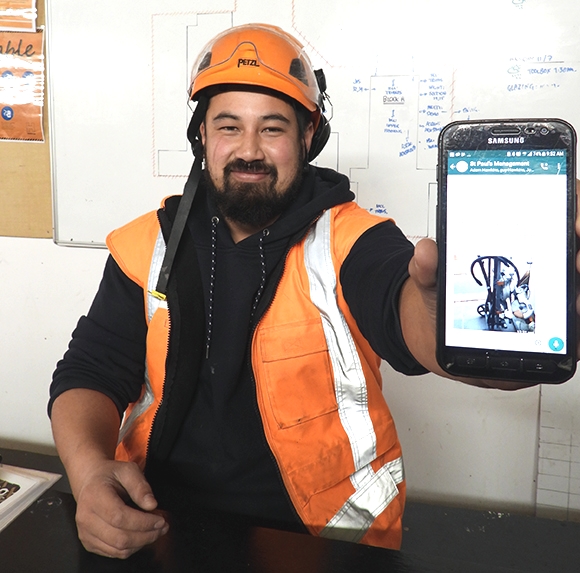 Benji Solomona with the WhatsApp app that is used on the site.

Benji Solomona has a simple formula for looking after his team of carpenters.

It’s a philosophy that has worked for his team at Hawkins which is currently working at the St Pauls Apartments project near Parliament.

One of that team is David de Thierry, who was doing a Passport course in Building Construction with Site Safe. He impressed trainer Jenni Maxwell with what she said was his “knowledge and wisdom beyond his years”, but David in turn sang the praises of Benji, who’s the leading hand for the carpenters.

So we talked to Benji and asked him about how he and his team operates and why.

Benji came to New Zealand from Samoa in 1996, moving to the not hugely tropical area of Upper Hutt. Step one was learning English. He then went to Heretaunga College and when he finished there he became a qualified landscaper. He ran his own business for a couple of years but decided he needed a change.

“I remember as a kid, police, teachers and builders were always up there on my list as people to be,” he says.

So he retrained as a carpenter through BCITO and has been with Hawkins for four years in the carpentry team.

He has some strong thoughts about valuing people, and particularly about people in the trades. He feels some people don’t respect builders like they use to.

“For me it is bringing that value back to the guys.

“So every week we have the usual weekly toolbox talk with the Hawkins team. But we also have a monthly extended talk and that’s when the guys voice their opinions and what we can communicate to management on how to help us do our jobs.

“”One of the things we did was to just brainstorm about team values and got them to throw out the things they value in a team.”

These got listed on the whiteboard in the smoko room for all to see.

“We got words like listening, integrity, attitude, turning up, honouring [one another] … there’s a whole lot of things.

“Others [he says, pointing to the whiteboard] are goalsetting, respect, communication, equality.”

Obviously one is a pay rise,” he laughs.

“The other is opportunities to do something new and develop.”

But being valued and cared about were also important.

Then Benji asked the team about the culture they kind of worksite they wanted to work in.

“By the time we got to the workplace culture it was narrowed right down to reliability, respect, praise, diversity, trust - a bit of banter - ownership and closeness.

“And I didn’t have to push this, it was all coming from the team.”

The goal is a culture where people want to go to work, where they feel valued and they enjoy what they do.

Some building sites are just horrible places, he says. People aren’t respected and they are looked down on either by fellow workers or some managers who don’t appreciate the skills tradespeople have.

But he says by having the team run things, it makes for a much better place to work, both with the workflow and the pressures on people.

“It’s a much better site. I mean there are obviously  hiccups on the site, things like delays in plans and things, but those are all to do with work now.

“It keeps business separate from any issues about the actual wellbeing of each person.”

Which is something that’s important to him as well.

“Ï found out on my last time at Site Safe that the highest rate of suicides is in construction.”

It’s an appalling thing, he says. Removing stress is one way to help people, which is where  the team approach helps.

When management asked what they could do to help the team, the answer, Benji says, was to ask for weekly goals to work towards rather than daily tasks.

He says the old style of doing things was sticking one person in charge, giving them three or four workers and telling them to get it done.

“This put a lot of stress on that one person and you’re not actually using the others well.”

But with a weekly goal everybody mucks in as it’s a team project.

“As an example, management can say to us they want a raking wall done by the end of the week.

“So we make sure we’ve got all the materials on the Monday, come Wednesday we see where we’re at, and by Friday, win or not, at least we’re tracking things a lot better.

“Because the guys are working like this there’s closer communication and they feel a lot more involved in what has to be done.

“And now they own that, their name is on it. They know they can’t blame anyone else,” he laughs.

Working like this also puts it on everyone to not let their other team-members down.

“With the younger ones it gives them some responsibility. They go ‘oh shit’, I’ve got to turn up, I actually count as a part of this team!”

And getting the younger guys to turn up is no small issue, Benji says.

“Before they got here some of the apprentices weren’t driven enough to even show up. Now we say, ‘we’ve got your back, now get to work!”

“While we’re pushing them, we’ve valuing them.

It’s saying, ‘Man, you guys can do this. But it’s also saying, ‘things aren’t handed to you mate, it’s on you guys!’”

The team approach just isn’t good for morale and wellbeing, it’s useful for safety too.

“We say, you look after the hazards in your work area.

“You take ownership of any ducting that’s missing, any trip hazards, your leads.”

He has his Site Safe Gold Supervisors Card and is still studying towards his New Zealand Certificate in Workplace Health and Safety Practice.

Apart from using the teams to take responsibility for their areas, the whole site makes use of the WhatsApp phone application to keep an eye on health and safety issues.

It was introduced by new project manager Jody Farmer and it is a free app that people can post to at no cost and is instantly updated.

Benji says it has changed how quickly people get told about what’s going on.

“We trialled it, we got everybody’s number on it and we’ve put it onto our induction as well. “When anybody new comes in we tell them to download the app and we show them how it works. Once people see it in action they go cool, that’s really easy.”

And because it is always up to date, it makes communication quick and universal.

“So  if we miss out something in our pre-starts like a crane lift we can just put it on the app and say ‘guys, just be mindful the driveway’s blocked off, just use the south access to get in and out.’

It’s good for keeping track of who needs what in terms of supplies as well.

“If the guys need anything they just chuck it on WhatsApp. Or if there’s a safety issue they take a photograph and put that on.”

“If they need a hand for a lift they’ll say, ‘can anyone help?’ and before you know it they’ll have five people there!”

But it’s not all work with the carpentry team.

Benji says during their talk around value and culture they shared ways to increase  morale and have a laugh.

From that they’ve set up a social netball team and decided to have team potluck lunches.

Benji says its all about listening to what people want, and then doing something about it.

Now living in Wainuiomata, Benji has also had a Sunday morning gig which was a test of his people management skills.

He was previously head of his Equippers Church production team, setting up the facilities for services at the Sacred Heart School arts centre in Lower Hutt.

It meant getting his team up and ready for work at 5.30am each Sunday to set up the stage and sound system. It also taught him a few lessons about motivating people.

“Actually, it’s not so much motivating as valuing them. And I use a lot of that [from church] at work.”

"You value people, and their ethic just appears naturally.”