Congratulations to Jeff Robertson from Aspec Construction for winning the Site Safe Safety Excellence award at the 2016 New Zealand Institute of Building and GIB Awards.

Established in 1986, Aspec Construction has experience in construction projects for all business sectors, and has completed a variety of commercial construction projects. Aspec is committed to the health and safety of everyone onsite, and takes aproactive, preventative approach towards further developing its strong safety culture.

We spoke to Project Manager Jeff Robertson about how a “safety first” approach saw him and the King’s School Centennial project team scoop the Safety Excellence award at the recent NZIOB Awards.

Requiring the demolition of a three-storey building and the construction of a four-storey state-of-the-art classroom and music block, the King’s School Centennial project presented several challenges for Jeff and the Aspec team. The site, which is in the middle of campus, adjoins four existing occupied buildings, and fronts the road where most of the school’s 700 pupils are dropped off and picked up every day.

The school has a strong commitment to safety and as part of the project brief, a detailed health and safety framework and charter was issued by the school board. These helped to trigger the significant safety focus of the project.

Working closely with the school, Jeff came up with several innovative ways of ensuring the day-to-day safety of both the pupils and the workers.

“Keeping the kids safe was the number one challenge because we were in the middle of campus and adjoining four existing buildings, so we were very much right in front of them,” Jeff says.

One exciting initiative was a digital fingerprint site access system which ensured automated tracking of workers onsite. The system, which was tailored to the site by local company Scan One, consisted of two scanners and turnstiles inside a portable shipping container, and worked as a “security portal” for all those entering the site. During induction, the worker’s details, police clearance, safety qualifications and fingerprints were all input into the system, so no induction meant no access to the site.

Aspec also put in place several other safety concepts, including low viewing windows around the site hoardings to allow pupils to view site progress safely. Solid, secure hoardings and conspicuous signage were installed and no truck deliveries were allowed during school pick up and drop off times. In addition, cranes onsite operated within a confined arc so they never directly hoisted over the campus. Jeff also undertook outreach with the pupils, meeting with a team of budding “student reporters” to discuss the project.

The portable security portal, the first of its kind in New Zealand, streamlined site access by cutting out the need for a pen and paper sign in. The system makes managing site safety easier by producing daily reports of who is onsite, and in the event of an evacuation, a similar report can be accessed remotely. The portal can block access to anyone who fails the police clearance process, and can even keep track of workers’ safety qualifications.

“The site setup shows a dedication to health and safety and allows the site managers to take one major concern – site security – off their list. In the world of health and safety, we have to take this as a well-earned victory. We can now build on this to push other safety goals, such as raising the standard of training.”

Jeff says educating workers to use the system was surprisingly quick, and within a week the site had full compliance, giving the project team confidence that there was no one “noseying” around the site that wasn’t meant to be there.

Investment in the portal has already paid off as the company didn’t have to hire a full-time staff member to man the gate. And as the system is portable, it has the added advantage of being reusable on future projects.

“The exciting thing is that this is just the start,” Jeff says.

“It sets the table for an effective health and safety plan, and helps emphasise to the client, public and workers that we, Aspec, don’t just accept the status quo. We are striving for excellence in all we do in safety from the moment we step onto the job site, through to the quality of work performed.

“We are here to raise the bar.”

“The site setup shows a dedication to health and safety and allows the site managers to take one major concern – site security – off their list. In the world of health and safety, we have to take this as a well-earned victory.” 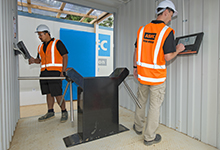 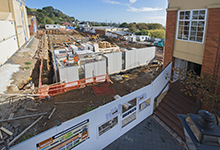