A screen grab from one of the Acrow Platform videos featuring Dan and Evander.

Acrow Ltd has made some stars out of its own staff with some award-winning health and safety videos.

The winner of the Mitre 10 Trade Safety Leadership Award at Site Safe’s Evening of Celebration on November 6, the national scaffolding firm commissioned videos focusing on health and safety and used its own people to talk about the things that matter.

The award judges said the trick was to come up with messages that made a real difference and stuck in the minds of the company’s 400 staff and sub-contractors.

It was important to make the videos authentic and relatable, so actual workers were used to host the videos and create much of the content. As a result of the company auditions, two naturally talented workers - Dan and Arama - were picked and they were given some extra performance training from former Shortland St actress Maggie Eyre.

The award judges said they had plenty of natural charm and that made for professional and engaging performances.

But it wasn’t all health, safety and scaffolding. There was a musical talent quest called Acrow’s Got Talent, where staff submitted their amateur performances shot on cell phones. The best one in each episode won a prize from Acrow.

The videos were commissioned by the previous General Manager, Philip Manning, and produced by Omnicron Productions.

Mr Manning and senior health and safety managers then toured the country showing the videos to help build a stronger safety culture within the company.

“And they’re not just any old videos either,” said the judges.

“They are top quality productions shot in the branches and on site with people out of the business presenting key messages in language everyone understands.

“And gosh, those videos are GOOD! Good enough to have won a Gold Camera award at the 2018 US International Film and Video Festival where they were up against strong competition for films made to educate stimulate or motivate staff.”

They are also good enough to have Acrow staff asking for more.

“It was a case of trying to do something a little different and get a consistency of messaging across 400 people in many locations around the country.

”The videos are a mechanism for guiding the conversations held on the roadshows and workshops and getting the guys and gals talking amongst themselves.”

Here is the first Platform episode. 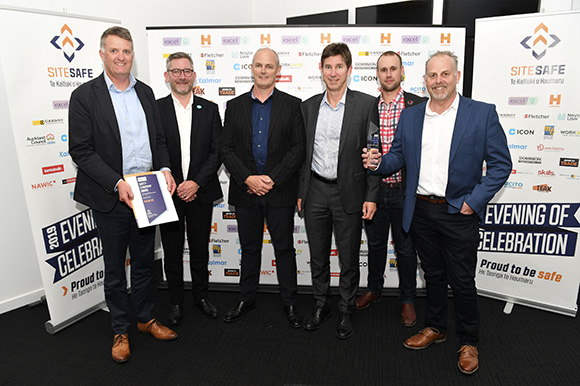