When suicide hits in the heart of the family, and the firm Sue Hughes supports Kristal McGill during the acceptance speech for Switched On Group’s Kalmar Mental Health and Wellbeing Award, with Camille Hughes at back.

Switched On Group was already taking mental health and wellbeing seriously when the worst of all things happened.

Jonny Hughes, a key part of the business, brother to chief executive Chris, a father, son, brother and beloved workmate, took his own life on New Year’s Eve 2018.

In the depths of the grief, the devastated family members and staff from the company stepped up to the challenge of making things better for the construction industry.

Among their many initiatives they have put new toolbox talks and support processes in place, found mental health champions from inside their own business, and reached out to the broader construction industry to make a change.

Switched On Group, along with FloorRight Installations and Team Cabling, were tied winners in the Kalmar Mental Health and Wellbeing Award at the annual Site Safe awards for their efforts in promoting mental health and wellbeing.

In a sorrowful acceptance speech starting with the old proverb, Kristal McGill, Health, Safety and Environmental Manager at Switched On, spoke of their loss while tears welled in Sue and Camille Hughes’ eyes.

What is the most important thing in the world?

In her speech Kristal praised the work done by all the entries and the finalists in looking after their people and she singled out Paul Lynch from FloorRight Installations, another finalist. She said it was Paul’s observation that the most important tool a tradie has is the one that sits on their shoulders and she thanked him for his work in raising awareness about mental health.

“Our best tool is our brain and we have to look after it.”

“For me, acknowledging Jonny is easy. He was charismatic, funny, and such a breath of fresh air. I just wish he’d stuck around to drink whisky with me tonight. Or, as we joked, to get our hands on a taser so we could try it out. But not at work – the safety plan would take too long.”

She said it is through the greatest of pains that people find the strength to really make change happen.

“During an incredibly difficult time we felt the leadership, support and backing of the Hughes family, our directors, and Chris Hughes, our chief executive.

“Chris pulled our team and Jonny’s work team together and through the family’s openness to share their grief, we were able to navigate through it. We allowed difficult conversations to be a part of our business.”

She thanked Sue Hughes for her incredible strength right through the process which saw the company take a national lead in mental health practices.

Since that difficult time, more than 600 staff and subbies have been trained in mental health awareness. Chris Hughes in a scene from an Open Minds video.

The award judges said: “Switched On Group has involved itself in a series of community collaborations and partnerships aimed at supporting the young, the at-risk and the disadvantaged to help them find a place in society.

"Chris Hughes has become a regular figure in the media and has collaborated with the Mental Health Foundation in their Open Minds videos."

"Chris says that Switched On team members are proud of their contributions to changing attitudes and giving opportunities. The judges wholeheartedly agreed!” 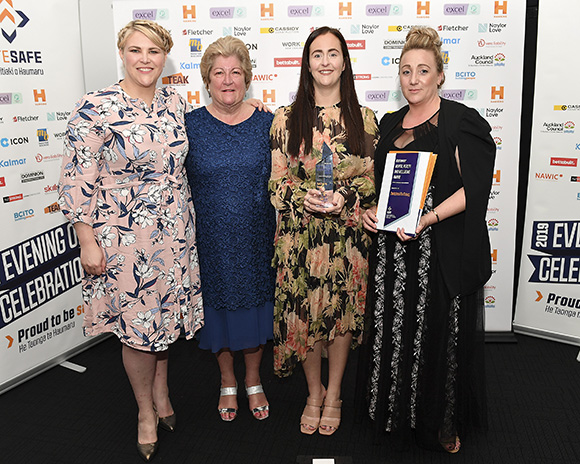 The team from Switched On Group with the Kalmar Mental Health and Wellbeing Award. From left, Camille Hughes, Sue Hughes, Shelley Hughes and Kristal McGill.