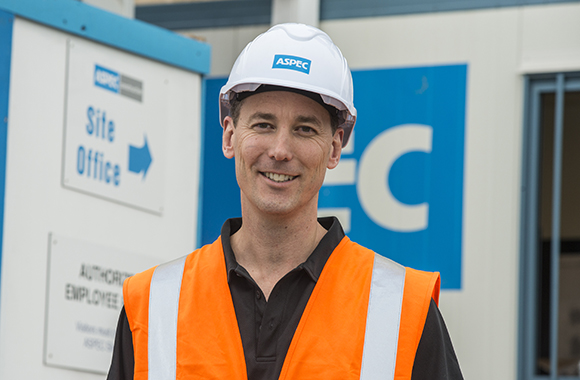 Jeff Robertson, a project manager at Auckland-based firm Aspec Construction, says his focus on safety began early in his career, when a 1m fall from a shoddily-built scaffold landed him in hospital for four days.

Fresh out of an architecture degree and working as a hammerhand at the time, Jeff says the experience taught him the real-life impact of the “she’ll be right” approach to onsite safety.

“It has given me a better appreciation of what it’s like to be off work injured,” Jeff says.

“It was pretty clear from that experience – and it wasn’t a big exposure but it had quite a lasting effect physically - that it’s not just the big hazards that you need to be wary of. Just a combination of young staff and a bit of naivety can easily lead to those accidents.”

Jeff was awarded the 2016 Site Safe-sponsored award in recognition of his safety initiatives on the King’s School Centennial Project, which involves the demolition of a 3-storey building and the construction of a 4-storey state-of-the-art classroom and music block.

“This is the first time I’ve been nominated for any award so I was pretty stoked to hear that I’d got through to the final round and that we were successful,” he says.

Working closely with the school, Jeff came up with several innovative ways of ensuring the day-to-day safety of both pupils and workers.

“Keeping the kids safe was the number one challenge because we were in the middle of campus and adjoining 4 existing buildings so we were very much right in front of them.”

One such initiative was a digital fingerprint site access system which ensured automated tracking of workers onsite. Aspec partnered with local company Scan One to tailor this technology for the site.

The access system, which consisted of two scanners and turnstiles inside a portable shipping container, worked as a “security portal” for all those accessing the site. Workers’ thumb or fingerprints were recorded as part of the site safety induction process - so no induction meant no access to the site. During induction, the inductee’s details, police clearance (a school requirement) and safety qualifications were all input into the system.

Jeff says educating workers to use the system was surprisingly quick and within a week the site had full compliance, giving the project team confidence that there was no one “noseying” around the site that wasn’t meant to be there.

“It sets the table for an effective health and safety plan, and helps emphasise to the client, public and workers that we, Aspec, don’t just accept the status quo. We are striving for excellence in all we do in safety from the moment we step onto the job site, through to the quality of work performed.

“We are here to raise the bar.”

The access system has already paid for itself as the company hasn’t had to hire a fulltime staff member to man the gate. And as the system is portable, it has the added advantage of being reusable on future projects. Access is faster than signing in with a pen and specific safety messages can be displayed on the sign-in screen. The system allows management to produce daily reports of who is onsite, and in the event of an evacuation, a similar report can be accessed remotely. It will also block access to anyone who fails the police clearance process, and can even keep track of workers’ safety qualifications.

“The possibilities are endless, you can add Site Safe passport details and when it expires you can get an alert to remind people to get a refresher course.

“The exciting thing is that this is just the start. The site setup shows a dedication to health and safety and allows the site managers to take one major concern – site security – off their list. In the world of health and safety, we have to take this as a well-earned victory. We can now build on this to push other safety goals, such as raising the standard of training.”

Other onsite safety initiatives included installing viewing windows around the site hoardings to allow pupils to view progress onsite, giving them a safe way to view the construction activity while keeping them away from the busy vehicle gate.

Site Safe Chief Executive Alison Molloy says it was great to see such a worthy recipient take out the inaugural award for Safety Excellence.

Convenor of the judging panel, Simon Barnes, says the standard of award entries this year was once again impressive.

“The eventual winners were justly outstanding and worthy of award recognition.”

The NZIOB and GIB Awards for Excellence are in their 23rd year and celebrate the professional excellence of individuals in the building and construction process, rather than the project or completed structure.

The winner of the 2016 GIB Supreme Award was Rodney Verhoeven, a project manager with Hawkins, for his role in managing the Walter Nash Centre.