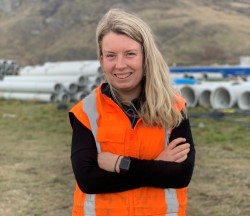 Scooping a Site Safe scholarship is a sure-fire way to get ahead, says scholarship winner Anna Winter.

The 24-year old site project engineer at Fulton Hogan says receiving a Site Safe scholarship helped put her on track to her current role, in which she helps manage the health and safety, environment and quality on a multi-million dollar project for a new Queenstown subdivision.

“It’s opened so many doors. I’ve received a lot of recognition from my work because of the scholarship and it’s the kind of thing employers are looking to see on your CV – it really puts you ahead of other applicants.”

Anna says she was motivated to apply for the scholarship after realising it would offer her free training and the chance to meet up with other locals working in the same field.

“Everything that we do relates to health and safety – it’s the backbone of the industry and at Fulton Hogan we understand how important it is. The courses that I took for the scholarship have really helped with my broader day-to-day planning and helping to get all those ducks in a row. I’ve found it quite easy to put the things that we were taught into practice when I got back on the job.”

Anna says although she completed a Bachelor of Science at Otago University in Geography and Environmental Management, she never dreamed of working in construction until a chance conversation sparked the idea.

“I left university with no idea of what I was going to do. I was working in a bar and talking with some of the guys and they suggested it, so it was totally random and I was very lucky.

“It was a great opportunity and I thought it would be really silly if I didn’t give it a go, and in some ways, not knowing much about the industry made it new and exciting.”

While she had some initial trepidation at being one of the few women on site, she has nothing but good things to say about the guys in her crew.

“I remember thinking this is going to be hard and quite intimidating but now some of the toughest guys have turned out to be my biggest mentors – I’ve found if you respect them, they will respect you and now most of the guys are kind of like my big brothers.

“And I think they do really appreciate the support and the ‘softer’ style that women sometimes bring to the team. Some of the guys have really opened up and talk to me about stuff that they wouldn’t with their mates.”

And even though she has to hit the road at about 6.15am every morning – no small feat on a freezing Otago morning – Anna says she wouldn’t dream of doing anything else.

“Working with the guys is the biggest buzz. I’m constantly learning and every day and every job is different. I love achieving things and not just ticking things off but doing them well, and working for a company that I’m proud to represent.”

Apply for a Site Safe scholarship >>