Doing it right every time 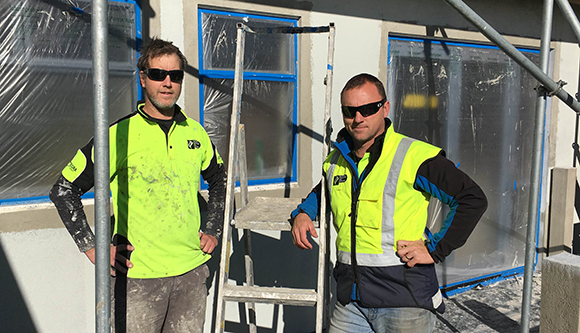 Owner Glenn Munro (right) on site with one of his foremen, Paul Cawood.

A near-death fall has sparked a health and safety turnaround at a Christchurch-based plastering company.

A Properly Plastered employee suffered serious injuries after falling more than 4 metres while carrying tools up to the second lift on a standard scaffold. Three years later he is still unable to return to work and has on-going neck problems and migraines.

Owner of Properly Plastered, Glenn Munro, says the shock of the incident, and the investigation that followed, sparked a review of their health and safety practices which has revolutionised the way he and his crews approach their work.

“After meeting with the family and the WorkSafe investigation we had to have a good look at ourselves,” Glenn says.

“When you are sitting there answering ‘no’ to that many questions you know you have to sort yourselves out.”

In the aftermath of the Christchurch earthquakes and the building boom that followed, the team had grown from five to about 30 staff and its approach to health and safety had simply failed to keep up with the growing business, he says.

“What WorkSafe said to me was that our health and safety system was ‘okay’, but it hadn’t grown with the size of our business - and that’s what we’ve gone about doing now.”

Since the fall, Glenn has turned to Site Safe for support and now invests heavily in health and safety training, with almost half his staff completing training above passport level, with three, including Glenn himself, hoping to graduate with the Certificate in Construction Site Safety later this year.

The team had been eager to take on the extra measures and additional training, Glenn says.

“The bulk of them were involved in the near-death so it was very easy to get their buy-in. They want to know that we are doing something to prevent it from happening again.

"A lot of them see that we care about them and we want them to go home to their families in one piece.”

The crews are now vigilant about using health and safety software to build site-specific safety plans (SSSP) and record incidents.

“We noticed just how much stuff we were missing like scaffolds not tagged, whereas previously we’d just jumped on. Now the first thing the crews are thinking about is doing an assessment - and SSSP becomes a tool in that respect.”

The fall was the first serious injury in the company’s 20-year history, and Glenn is determined it will be the last.

“That’s the first thing we do on site now, is to fill out an SSSP and have a look and make sure things are right.

“Hopefully with what we’ve put in place, the boys are doing it right every time.”