A guide to helping your mates 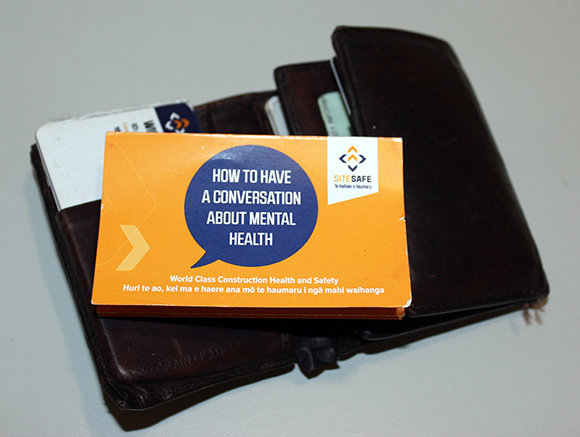 Got a mate who’s looking down, isn’t themselves, maybe gone a bit quiet? Want to help but aren’t sure how?

A new pocket guide about how to have conversations about mental health has great advice on looking after friends and colleagues.

And it’s easy to lend an ear, listen, and have a conversation with someone, says Paul Lynch, a guy who knows what it’s like to do it tough.

The Christchurch carpet and vinyl installer lost his brother Brett to suicide in 2013. It took him a while to shake off resulting anger and darkness that he felt, but he did, and he wrote the book Suicide; Aftermath & Beyond about it. He has made it his mission to help people in the trades talk about things that are getting them down, and he says the new guide is a top tool to do this.

Paul says people don’t have to be a counsellor or a therapist to help, they just have to take time to listen. 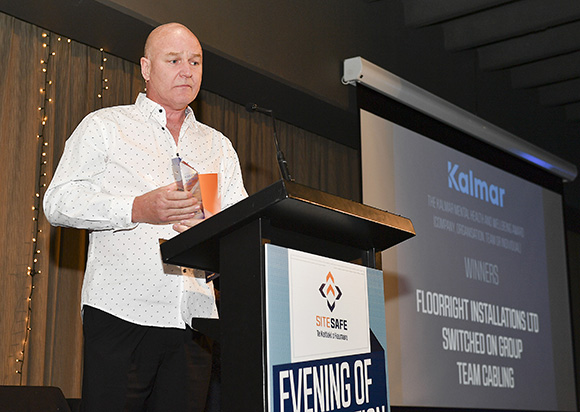 Paul Lynch of FloorRight Installations accepting his award at the Evening of Celebration.

“In my experience in about 99 times out of a hundred, all that’s required is a conversation. It’s that simple act of letting people talk or share something they might be going through.

“Just listen, let them speak, and validate what they’re saying. It doesn’t have to be a crisis intervention.” (Though there are emergency numbers provided in the pocket guide if the situation requires higher intervention.)

“I know myself, once you’ve unburdened yourself of something that’s been troubling you, a lot of the pressure goes away with the words.”

The free pocket guide has been created by Dr Kate Bryson of Axon Consulting - one of the key researchers who worked on Site Safe’s study into suicide in the construction sector last year - in association with industry personnel.

Site Safe is pleased to be able to offer the guide in conjunction with Construction Health and Safety NZ (CHASNZ), the Mental Health Foundation and Mates in Construction.

The guide is free for ordering here. To download a copy go here.

The key messages in it are:

Auckland electrical contractor Dave Burt uses a question to break the ice with people that is one of the suggested phrases in the guide:  “What’s happening in your world?”

It’s an open-ended question he came up with after dealing with depression himself. (It’s detailed in his book Lengthening the Shadows which is available here. It can be a dark topic but the book is a moving, sometimes even funny account about a guy who just tried to carry on by himself for too long.)

One of the three winners of the Kalmar Mental Health and Wellbeing Award last year, along with Paul Lynch and the team from The Switched On Group, Dave  put money from his book towards the pocket guide and he says it is full of good advice. 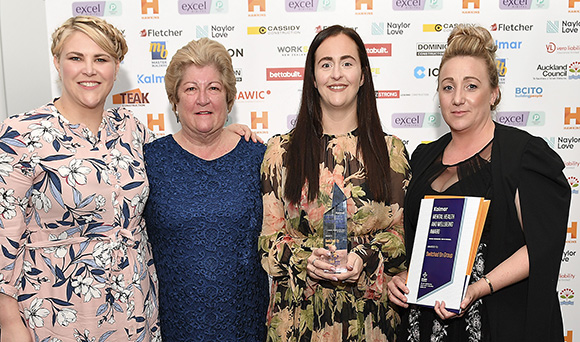 Some of the team from Switched On Group with last year's Kalmar Mental Health and Wellbeing Award. From left, Camille Hughes, Sue Hughes, Shelley Hughes and Kristal McGill.

Kristal McGill from The Switched On Group says the pocket guide is a top resource and they will use it as the firm rolls out a its own initiatives this year.

Currently it is focusing on how alcohol can affect the people at work and home and how to reach out to services if they, or someone close, may be struggling with addiction issues.

The company is also about to run work groups with managers and supervisors to help them spot people who are distressed – including how to keep an eye on themselves – and is giving them the resources to help support their people.

“This will build on training provided during 2019 and will take all people leaders through our best-practice approach, our resources and our support for both the manager and individuals involved,” Kristal says.”

Paul Lynch says one of the issues people worry about in dealing with mental health is that they don’t feel they’re qualified to help.

“The truth is you don’t need to know anything about it, you just need to be a decent enough person to allow somebody to speak and to get whatever’s on their mind, off their mind.”

He says that’s where the pocket guide helps.

“I’ve always said, it’s not like we don’t care or want to check up on our mates, it’s just we often don’t know how to. We need to change that.” 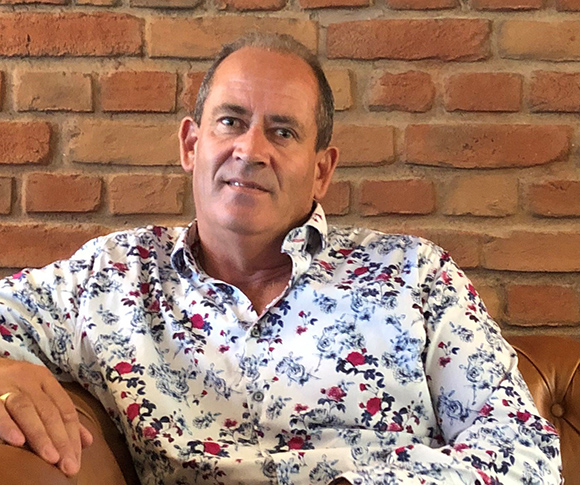 Dave Burt of Team Cabling put money from his book about dealing with depression towards the pocket guide.

Dave Burt agrees. And he says helping someone is actually pretty easy.

“You may not be aware; but every one of us possesses a very powerful gift. You may not know that you have this gift, but trust me on this, you do – it is the power to give and provide hope.

“Having experienced depression, I can tell you hope is something I will never take for granted again. For those dealing with a mental health issue, hope is all powerful.

“Think of someone in your life who means a lot to you; be it a family member, colleague or maybe a mate,” Dave Burt says.

“Take the time to connect and ask them what is going on in their world. You might just be surprised by what you hear, and what a difference you can make in someone else’s life.”