Congratulations to Aaron Billing and the team at Upright Scaffolding for taking out the Safety Contribution Award at the 2017 Site Safe Construction Health and Safety Awards.

Thinking like an All Black is the secret behind Aaron Billing’s award-winning approach to health and safety.

No stranger to injuries himself, Billing knows first-hand the impact they can have after a spate of unrelated accidents – including a near-death bike crash, a car crash and broken ribs sustained during the February 22 earthquake, left him struggling.

Billing – who is also a personal trainer – says sports always helped him to cope with challenges in his life, so it seemed a no-brainer to apply sports philosophy to his new role at Upright.

“Getting into sports when I was younger helped me turn my life around.”

“For me, if you focus on doing things well and taking pride in what you do in every aspect of the business, then that flows into health and safety as well.”

It is this attitude has won him national recognition, seeing him take out the Contribution Award at the Site Safe Construction Health and Safety Awards.

A huge rugby fan, Billing says it wasn’t long before he was applying his sporting ideas to his work as a scaffolder – a trade often known for its “rough around the edges” reputation.

“When I first started, I was really shocked – some of what was going on was like what you’d expect to see in the 1980s.

“But then I started to understand why there was that attitude of complaining and not doing anything about it and I realised it was because there was no open-door policy and the guys were simply afraid to speak up.”

Believing it all went back to company culture, Billing worked with the company’s directors to introduce the idea of the “All Black Standard” – a work ethic where the team aims to be the gold standard of the scaffolding industry in everything that it does.

“I think about it like how we had that turnaround after losing several World Cups – it became about the culture and the brand and the team knowing that you don’t own the jersey, you have to earn it.”

And in an environment where a mistake can be fatal, it’s vital everyone does their job well and feels comfortable talking about problems on site.

Since Billing has been at Upright, he has worked to close the gap between the directors and workers and helped to implement a no-blame policy where workers feel safe talking to management and take a solution-based approach to problems.

A big Richie McCaw fan, Billing says changing the approach of the bosses was key.

“You’ve got to start from the top and make the directors believe we can be better. That’s what the ABs had with Richie – he always led by example.”

Kicking off the idea of company pride was a big first step.

“I started talking about one guy to the directors – just planting the seed – by saying ‘you know, I can’t put my finger on it, but he’s got the ‘Upright way’.”

“And from there I worked with the directors to show the guys that we had a vision as a company.”

More authority has been delegated to some workers, who now act as supervisors on site, and the team has regular debriefs to discuss what went well and what could be improved so they learn from each job.

Rather than rotating crews between various jobs so they never get to see their work completed, the crews now usually work solidly on one job, meaning they get the satisfaction of seeing their part of the project through to completion.

The Upright team has introduced “fruity Tuesdays”, veges to the Friday barbeque and cold drinks to site on hot days, as well as swapping out beers for non-alcoholic beverages at work events.

Billing has even helped one of the directors to compete in a half Ironman competition in Wanaka.

Billing says it’s all about creating a culture where everyone on the team aspires to be the best they can be.

“My approach is that we should not be a led team, but a team of leaders, and slowly but surely we are building that culture.

“For us it’s about putting health and safety first, and scaffolding next.”

“My approach is that we should not be a led team, but a team of leaders, and slowly but surely we are building that culture." 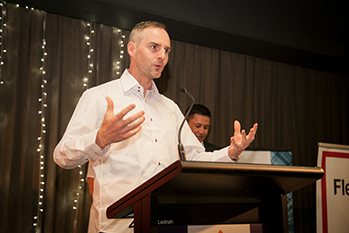